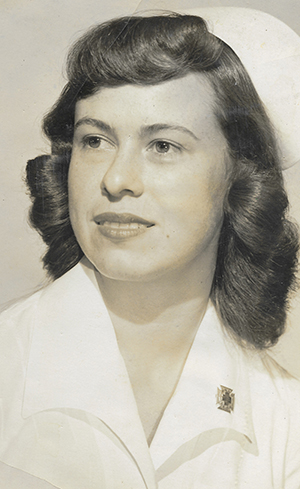 There may be no better way to honor the legacy of a caregiver than to support the next generation.

That’s the mindset that led John Ryan, and his wife, Marsha, to endow the Monica L. Ryan Nursing Scholarship with a gift of $100,000. Monica Ryan was John’s mother. She passed away in October 2019 at age 95.

“She was a role model for everybody,” John Ryan said. “She was the embodiment of determination and grace – a remarkable woman.”

The scholarship will benefit a student in SIU’s newly established Bachelor of Science in Nursing program. Preference will be given to BSN students who have expressed interest in working at Southern Illinois Healthcare after graduation.

“We hope the recipients will choose to stay local,” John Ryan said. “This program will serve the people of Southern Illinois. We are encouraging newly trained nurses to join the local team which provides extraordinary medical care.”

After their marriage, the couple moved to Jacksonville, Illinois. Although her career was put on hold while she raised four kids, she was always a full-time caregiver.

“Her energy was a marvel to all of us,” John Ryan said. “She took care of my father’s grandparents and parents, and her own parents as they aged. She was the go-to caregiver in the family.”

Once the children were grown, she renewed her license and then did volunteer work at Jacksonville’s hospitals until 2012 when she moved to Carbondale to be closer to her family.

Both of John’s brothers graduated from SIU, as have his and Marsha’s two children and a nephew.

“SIU has a special place in our hearts,” John Ryan said. “We have a lot of fondness for the university.”

The opportunity to earn a BSN in Carbondale made endowing a scholarship in his mother’s name the clear choice for the Ryans’ philanthropy.

“Health care is personal for everyone,” he said. “We are pleased to contribute in this way to the health of our community.”

For the Ryans, the ability to advance one’s education in the heart of Southern Illinois is what sets the region apart. That’s why they’ve made supporting SIU a priority.

“Getting an education is one of the most important things we can do,” John Ryan said. “You can’t do anything better with charitable donations than create an opportunity to help people better themselves.”