An Accomplished Alumnus with a Heart for Helping Others 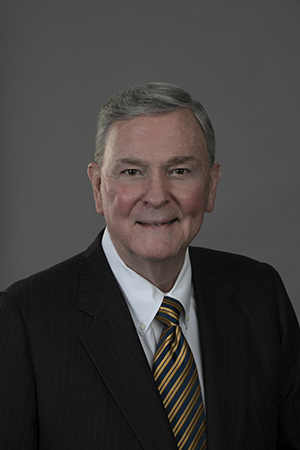 Tom Murray is a man of many accomplishments. From 1967 through 2007, he was employed at Sargent & Lundy, a global consultant to the electric utility industry. From 1993 through 2007, Murray was a senior vice president and an owner of the firm.

Murray completed a full two-year engineering program at Purdue University Calumet Campus in 1964 and became an engineering graduate at Southern Illinois University in 1967. He devoted more than 40 years to Sargent & Lundy before retiring in December 2007 as an executive vice president, owner and director of the company’s Power Delivery Services Business Group. He traveled extensively domestically and to the Middle East and Pacific Rim.

Murray is a registered professional engineer in many states and a member of several professional organizations.

As Murray neared the end of his company career, he and his wife, Jan, decided it was time to give back to others.

Since 2004, Murray has participated with the Special Olympics of Illinois. He served as chairman for the organization in 2008. He is a member of the board and serves on the executive and development committees.

At SIU, Murray serves on the Industrial Advisory Board of the College of Engineering. In 2012, he was awarded the SIU Alumni Achievement Award.

In 2008, the Murrays decided to establish a scholarship for students pursuing an engineering degree.

“We do not determine who should receive scholarship funding. We only care that the funds get into the hands of those students who deserve the help,” he said.

His desire to help others in need came from his early years at SIU. Times were hard financially.

“When I arrived on campus, it was bursting at the seams. There was not a single room available, so I ended up sleeping on a cot out at a farmer’s house outside of Murphysboro for a while,” Murray said. “I eventually found a space at the Tau Kappa Epsilon house.”

Murray said he thoroughly enjoyed his time at SIU, participating one year as a lifeguard at Campus Lake and working at The Club on the strip in Carbondale.

When he graduated from SIU, the country was at war in Vietnam.

“After graduation, I remember I submitted my application to Sargent & Lundy, but I didn’t hold much hope. Typically, you’d have to have many years of experience before you could be considered for a job at that company but, since many graduating candidates were in process to the Armed Forces and the company was under expansion, I got a chance to have an interview.”

Murray recalled that his interview took a full day filled with back-to-back interviews.

“The owner and the electrical department head of the company was the last to interview me. He looked at my résumé and said I have a question for you,” Murray said. “I see you took a transmission line design class at SIU. Are you familiar with the Maxwell-Boltzmann equations?”

Murray remembered his German professor at SIU explaining those equations so he gave him the answers he was looking for.

“He hired me on the spot and that started a 40-year career. I have reflected on that interaction many times. I am grateful for my education at SIU and how it prepared me for a great career at Sargent & Lundy," Murray said.

The Murrays have given back, donating $230,000 over the last 10 years to SIU. The Murrays have significantly funded a unique annual scholarship mandating full distribution of the annual donation within five years. The couple has committed to donating $125,000 for the next five years.

Dean John Warwick of the College of Engineering said Murray’s commitment and generosity to SIU are commendable.

“These funds have and will support many accomplished and well-deserving students in our College of Engineering,” Warwick said.

Murray’s advice to students is simple and direct.

“Never give up,” he said. “If you develop a set of goals and a direction in mind, map out your path. As long as you stay committed, you will find success at many levels.”